"Edgar Elbakyan" theatre was founded in 1994 by the RA People’s artist Armen Elbakyan. The first performance staged here was Armenian classic "Eastern Dentist" by Hakob Paronyan.
The theater participated in many international festivals. In 2004 the performance of "Last Waltz" was invited to the 12th theater festival in Damask where the RA People's Artist Vladimir Msryan was awarded with a special prize for the part of Edgar. In 2005 Anna Elbakyan and Vladimir Msryan were awarded with "Artavazd" prize as the pest artists of the year. In 2008 the performance "Won't you dance with me?" based on W. Saroyan works was a great success: Anna and Armen Elbakyans were awarded with "Artavazd" prize as the best artists of the year. In 2008 for the same performance Armen Elbakyan was awarded at Hungary International Theater Festival "Arkusfest" in the nomination of best artist. The art director of the theatre is Lily Elbakyan, the director is Ruben Abrahamyan. 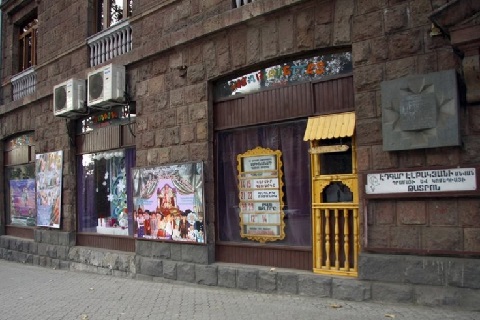